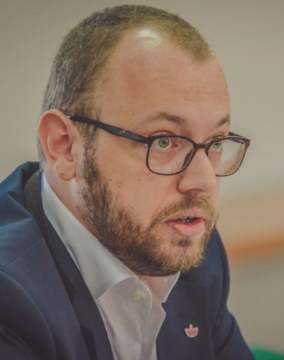 Bálint is an experienced political operative: for years he worked as a freelance consultant, providing strategic communication and campaign planning for political organizations, decision makers and candidates. Currently he serves as executive president of the Hungarian party in Romania – the Democratic Alliance of Hungarians in Romania.

Apart from his longstanding work with his party, for five years he held different positions in the Romanian Government: he was chief of staff for two Ministers and was later appointed State Secretary at the Ministry of IT&C.

Bálint has been involved in political campaigns for the last eighteen years – he planned, coordinated and consulted campaigns in Romania, Bulgaria, Ukraine, Hungary, Austria, Lithuania, Slovakia, Moldova, Serbia and Jordan. He regularly conducts trainings and consultations for the US-based International Republican Institute, working with leaders and activists of more than 40 political organizations from all over the globe.